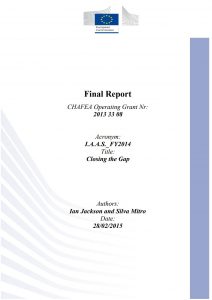 The last two decades have seen the rapid growth of ambulatory surgery in the more developed countries and significant improvements have been achieved in many IAAS member countries, especially Italy, Spain, Portugal and Hungary. In this light, the main objective of the IAAS 2012-2014 work plan was to contribute to the sustainable growth of ambulatory surgery in countries that had a large potential for expansion, paying special attention to Eastern Europe. This was reflected by the decision to organize the 2013 International Congress in Budapest.

The overall vision of the IAAS “DAY SURGERY – MAKING IT HAPPEN” was furthermore translated into the following 2014 objectives:

Activities during 2014 built on those performed in the previous three years: participation as collaborating partner in EU funded projects and the “Train the Trainers” educational plan for capacity building in the area of Day Surgery Services launched in 2012 in Budapest, Hungary, and more specifically on the experience accumulated during 2013. The main pillars of the 2014 work included:

Capacity building:
During 2014, this component consisted in offering a series of training workshops targeting health managers, clinical managers, nurse managers and clinical staff, such as anaesthesiologists and surgeons. The aim was to provide them with the knowledge and skills necessary to set up and manage Day Surgery Services. The workshops were held as planned in Croatia and Greece in collaboration with the Ambulatory Surgery Department at the Clinical Hospital Center of Zagreb and Nea Ionia Hospital of Athens and with the support of Greek Health Services Organization (EOPYY).
The table shows the dates and number of participants for each of these workshops. Participants were from Croatia, Slovenia, Latvia, Bosnia Herzegovina and Greece. Moreover, four different professional figures attended these events. The graphs below show the professional mix and geographical distribution of the participants. 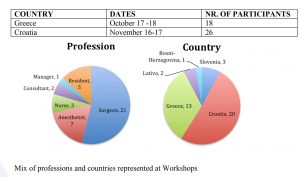 Workshop in Zagreb, Croatia
Follow up visits and professional exchange: A team of IAAS experts, respectively representatives of the Portuguese Association for Ambulatory Surgery (PAAO), the Dutch Association of Day Care & Short Stay (NVDK) and the Hungarian Association of Ambulatory Surgery (HAAS), and the Danish Association for Ambulatory Surgery visited ambulatory surgery department at the Clinical Hospital Center of Zagreb. The same team was involved in teaching during the workshop and this was an added value since they were able to understand the real context and adapt their teaching to the participants needs. This exchange represented a great opportunity for the IAAS experts who were able to interact with a number of colleagues and learn more about the barriers to Ambulatory Surgery development in Zagreb. It also contributed to creating awareness concerning the need to establish the Croatian association of ambulatory surgery and discuss the eventual support that IAAS can provide in this process. Two Croatian candidates visited the Ambulatory Surgery Department of the Hospital Center of Porto in Portugal.

Another important component of capacity building was an on line knowledge survey and a post training survey which aimed at gathering input from a wide number of registered participants of the IAAS workshops in order to respond to their training needs by properly tailoring workshop contents and plan the future training programme. According to the respondents’ perception of their training needs, the most important topics to carefully cover in the future were mainly related to management and organizational aspects of Day Surgery: setting up a Day Surgery Unit, its organization, issues related to human resources mix, understanding barriers to Day Surgery implementation, advantages and disadvantages of Day Surgery, AS pathway. Many respondents expressed the need to exchange experience with colleagues from other countries and be able to network with them as well as receiving updated information concerning Day Surgery performance in other countries. The findings of the on line knowledge survey served as input for the update of the Cross Cultural Training Manual, which was set up as an on line learning tool (IAAS website) to stimulate professional exchange and tutorship. Moreover, it is available into Hungarian, Romanian and Serbian languages to facilitate learning by non-English speakers.

Stimulation and dissemination of research activities.
As one of the core activities of IAAS, dissemination of the most recent research findings to IAAS members, the greater scientific and policy making community was carried out through the IAAS’s electronic channels. The activities in this pillar included publication of the scientific journal Ambulatory Surgery and the Newsletter, continuous update of the website to include the scientific journal and training materials and organization of the workshop ”The Future of Ambulatory Surgery”. This activity organized in collaboration with London School of Economics (LSE), London School of Hygiene and Tropical Medicine (LSHTM) and Organization for Economic Cooperation and Development in Europe (OECD) provided a forum for discussing the priorities of ambulatory surgery
research areas and its main outcome was a list of project ideas to pursue in the near future.

Networking and benchmarking activities:
The General Assembly (GA) held in May in Barcelona, Spain, represented the major networking opportunity for all the members and provided a forum for wide discussion on different aspects of Ambulatory Surgery. The 2014 Assembly focused on the scientific programme of the 2015 International Congress to be held in Barcelona from May 10 to May 12, 2015, and the selection of the best bid for the 2017 International Congress. It also decided to organize an extraordinary European Congress in 2016 to support the networking and dissemination of scientific information to the European community members who won’t be able to attend the 2017 International Congress in China. Considering the excellent work currently being done by the French government in developing and strengthening Ambulatory surgery in France, it was decided to hold the meeting in France and work closely with the French authorities. As far as benchmarking is concerned, on the occasion of the 2014 GA, the content of the questionnaire used for the biennial survey on Ambulatory surgery was discussed and the discussion of some specific technical issues was delegated to a small expert group who met later in the year. The survey was discussed with OECD representatives during the workshop “Thinking the Future of Ambulatory Surgery”. Special attention was paid to the definitions used by OECD and IAAS and differences were identified. The expert group that met in December 2014 decided to proceed with benchmarking focusing on the patient pathway and including indicators related to patient safety and quality of care, patient satisfaction, cost effectiveness and policy. To ensure a wide impact and consensus, it was decided to pursue the idea of establishing an international network focusing on benchmarking and prepare a proposal to submit to the COST programme for funding. In the meanwhile, IAAS will continue to carry on the surgical statistics survey. The outcomes of the workshop “The future of ambulatory surgery” and “Rethinking the benchmarking tool” were considered by the Expert Group on Surgical Statistics and the final survey tool that will be used during 2015 as a preliminary step towards a benchmarking tool was prepared and approved by the ExCo members.